Mallory is an adventurous girl. She likes to go to Papa's Cheeseria 2 located 2 hours away from Mallory's home in Rockville. She is not married, but she is dating a boy named Rob D. Her neighbour is Jordan.

Mallory can be rescued in Level 6: Burple Purple Lake Base. She has the Dash skill and needs no skill to be rescued.

Mallory started on the Alapapa tribe. She started the game by making a connection with Charlie. She also got pissed off by Zoey's bossy attitude. Alapapa lost the first immunity challenge largely thanks to Charlie. Mallory, however, did not want to target her only ally. Just before tribal council, Mallory made a small bond with Raina. At tribal council, Charlie campaigned for Zoey's elimination. Mallory voted against Zoey. However Raina flipped and Charlie was voted out on the revote, leaving Mallory on the outs of her tribe.

After Alapapa returns to camp after voting out Charlie, Zoey is pissed off at Mallory for voting against her, causing Mallory to be angry and target her. Raina sees this as an opportunity to blindside Mallory. At the combined reward/immunity challenge, Mallory leads Alapapa to the first place finish after solving the puzzle the quickest. Alapapa sends Eggy to Exile Island. Back at camp, Mallory is excited to be the one who made her tribe win the challenge. Zoey gets pissed off by her behavior.

Experience as a contestant in Hashtags 2019 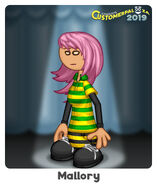 Updated by ColinLoLuser.
Add a photo to this gallery

Retrieved from "https://fliplinestudiosfanon.fandom.com/wiki/Mallory?oldid=137258"
Community content is available under CC-BY-SA unless otherwise noted.