N/A
Mackenzie is a male customer who made his first appearance in Papa's Theateria.

Mackenzie was placed on the Magi tribe. He and Harry bonded over laying around in the shelter while everyone else was doing work, which annoyed the rest of his tribe. He then performed poorly in the immunity challenge. After Magi lost the first immunity challenge, him and Harry attempted to target Daniel, who they found annoying and immature. However, they were outnumbered when The Dominators felt like their laziness was weighing the tribe down. This, combined with his poor performance in the immunity challenge, caused Mackenzie to be the first one voted out by a vote of 8-2 with only Harry voting with him.

Items unlocked with him 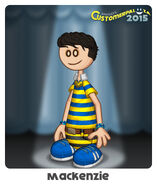 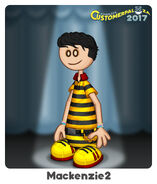 1/66
Community content is available under CC-BY-SA unless otherwise noted.
Advertisement