Luigismith is like Jacksmith in Flipline Games. Here, Luigi was planned to saved Princess Daisy to Nathaniel. 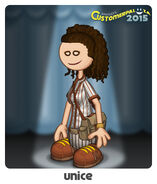 Unice make her first appearance to the game!

New look of Easter.
Add a photo to this gallery

Retrieved from "https://fliplinestudiosfanon.fandom.com/wiki/Luigismith?oldid=135766"
Community content is available under CC-BY-SA unless otherwise noted.