Jill started on the Maddi tribe. When the tribe was putting the shelter together, Jill noticed that Ikebana was missing. She figured out straight away that Ikebana was after the idol. Jill and Tia found Ikebana and told her situation to the men of the tribe. Maddi placed second on the first immunity challenge, keeping Jill safe. After the challenge, Jill and Tia bonded and considered making an alliance. Meanwhile, the men went to look for the idol. It was eventually found by Laci.

Jill and Tia formed an alliance, "The Endtakers" and agreed to target Ikebana if they would go to tribal council. Jill was the puzzle solver at the immunity/reward challenge and she barely edged out Eggy to win second place for Maddi, sending Dream to tribal council. After immunity challenge, Mex apologizes for being slow at the swimming portion. However, Jill and Tia still do not trust him.

Items unlocked with her: 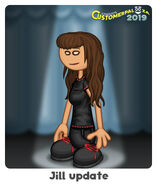 Updated by ColinLoLuser.
Add a photo to this gallery

Retrieved from "https://fliplinestudiosfanon.fandom.com/wiki/Jill?oldid=110405"
Community content is available under CC-BY-SA unless otherwise noted.