Ikebana is a respected teacher at FFCWSS. Her students admire and respect her. She is also a world-famous model, competing in over 1,000 fashion shows and winning more than half of them. Whenever Ikebana walks into the Freezeria, many faces are shocked.

Ikebana started on the Maddi tribe. Right after the tribes arrived to their respective camps, she went to look for the idol. Not finding it, she gave up on it. This put her on the outs of her tribe. Maddi finished second in the first immunity challenge, keeping Ikebana safe.

Ikebana was fairly invisible during episode 2, only seen sitting out of the combined reward/immunity challenge. Her tribe ended up finishing in second place and she avoided tribal council again.

NOTE: Please read this to understand valid and invalid reasons for editing this page. Thank you and have fun on the wiki!

Ikebana was a female contestant from Batch 3 on Hashtags Infinity. 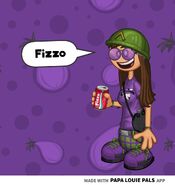 Fizzo Team, Ikebana
Add a photo to this gallery
Retrieved from "https://fliplinestudiosfanon.fandom.com/wiki/Ikebana?oldid=136519"
Community content is available under CC-BY-SA unless otherwise noted.