TBA
Hashtags: Squared is the fourth combined of Hashtags.

On Day 1, Only four contestants entered the game since the eight other contestants wish under quarantine due to the COVID-19 Pandemic. Alfred, Indigo, Clementine, and Hayden entered the game and have a task competition to divide into two team, Boys vs. Girls to win the Head of Gameplay Alfred and Hayden was team up and Indigo and Clementine was team up as well as they're both the only contestants in the game. After the game, a new contestant, Ken entered the game on Day 6 after Clementine and Indigo hails to become both Head of Gameplays. But after they won the game, the hosts said that their will be no eviction happening tomorrow as the other contestants was under quarantine there are only 5 of them competing at the game.

This week, another task was given to them which is to clean and do chores. After that other contestant join the game but he was automatically nominated because a secret task was given to him that the other five contestants shouldn’t knew. The nine contestants which was not in the game was thinking if he will save or evict him by Siri they have three tries to talk to Siri if they want to save or to evict him. After the day the nine contestants vote Andy to vote to save/stay or vote to evict/leave and the majority is 5 save/stay.

On Day 8, they played memorization game for HoH competition. This game is pair competition so it only one of the two-in-one contestant could join in the HoH and they pick Winston. Since the pairs have been pick, which is Ranz/Ken, Gavin/Shoichi, Twilight/Alfred, Indigo/Winston, Spike/Walker, Hayden/Sparkle, Niana/Clementine, & Piper/Andy; the winner of the game are Twilight and Alfred and will be the Co-HoH for the next week since this week is “The Mole” week. After the mole week the hosts decide to have a nomination for next week and the nominees are Piper, Sparkle, and Walker with all in 7 points each of them.

On this week they have a task which was totally squared for Valentine’s Day. They'll gonna tell the broken hearted side and the happiness love life that they ever had or have. After they express the hate and love of Valentine’s Day, the hosts had a task to them which called “Cupid’s Bow”. Next, the voting will stop tomorrow.

An Individual HoH competition happened and the fastest contestants wins to eat the gross food wins, after the HoH competition, Gavin & Ken wins. After that they have their task which you need to play "Jenga" they need to create a small house with Jenga. After the game the nominees was revealed and it was Andy with 5 points, Walker with 9 points, and Hayden with 7 points. And after the eviction night the evicted contestant was Hayden with 0.03% to save votes meanwhile Andy got the highest votes with 87.92% and following to Walker for the second time nominee with 12.05% of votes.

This week and next we will have super-charged HoH who ever becomes an HoH will be the HoH for this week and next week but that will only happen if Siri agrees to it. Tomorrow, you’ll know who will become an HoH for two weeks or one week! If the Siri didn’t agrees with it a double eviction will happen and if Siri agrees an opposite will happen with only one contestant will gonna leave the game. Twilight became an HoH for Week 6 but is she will a super-charged HoH and became an HoH next week let's all find out on Saturday. After that Siri agreed and next week Twilight is also an HoH. After that nominations void because Clementine walked due to unknown reason.

Since Twilight was a super-charged HoH, she is also an HoH for this week. 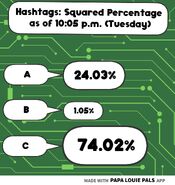 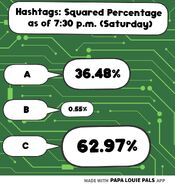 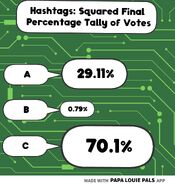 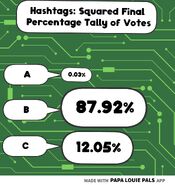 3rd Eviction Night Final Percentage Tally of Votes
Add a photo to this gallery
Retrieved from "https://fliplinestudiosfanon.fandom.com/wiki/Hashtags:_Squared?oldid=137332"
Community content is available under CC-BY-SA unless otherwise noted.