Diwali is a holiday celebrated in various Papa Louie's restaurant time-management games. When a player reaches this holiday in any of the games below, the following characters make their first appearance as well:

Stickers such as "Diwali Dhamaka" and "Spiritual Sushi" are earned when all of the Diwali exclusive ingredients are unlocked.

To celebrate this holiday, customers bring in Diwali sparklers with the exception of Manas who brings a Diwali lantern.

And here we go with a new holiday: Diwali!

Known as Festival of Light, Diwali is originated in the Indian subcontinent and is mentioned in early Sanskrit texts. It is a festival typically lasting five days and celebrated during the Hindu Lunisolar month Kartika (between mid-October and mid-November). It symbolizes the spiritual "victory of light over darkness, good over evil, and knowledge over ignorance".  People celebrate this festival by lighting up their homes with diyas (earthen lamp), cleaning their homes, making decorations on the floor, such as rangoli, and sharing sweets with each other.

I just thought that this holiday would look great if it appears in Papa's Halwa Mia!

Expect lots of lights and fireworks around the town while unlocking the traditional flavors of India.

Customers who favor this holiday

Picture introduced in the Sneak Peek 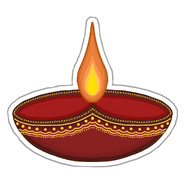 Diwali Dhamaka sticker
Add a photo to this gallery
Retrieved from "https://fliplinestudiosfanon.fandom.com/wiki/Diwali?oldid=129044"
Community content is available under CC-BY-SA unless otherwise noted.